I did something today I thought I would never do: I took our dog Harper to Doggie Day Camp. 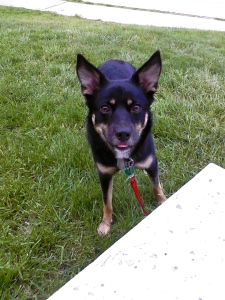 I got a call from our landlord telling me they’re showing our apartment in 15 minutes so I had to have the dog out of there. (Yeah. Fifteen minutes is barely enough time to get home from work, much less make the house look half-way presentable.) The landlord planned to show our apartment multiple times throughout the afternoon, so I either needed to keep Harper with me at work (a discussion worthy of its own blog post) or send her to a doggie day care.

Doggie Day Care: the epitome of American overindulgence in materialism and laziness. “I am not walking the dog in those filthy streets. I’ll get my exercise in the gym, and he can get his at day care. I don’t care what it costs.” “My child goes to day care, so my dog should, too.” “I love my dog, but I hate how hyper he is when I come home from work, so I’ll send him to doggie daycare so he can play and get worn out so I don’t have to deal with his hyperness.”

…or so I assumed…

With the help of our veterinarian, I quickly located a reputable Doggie Day Camp in town. When we got there, I was greeted by 4 people behind a counter. Oh, and about 20 dogs. Just hanging out. My dog doesn’t really know how to do that unless she’s tired. Ah. That must be it – these dogs have been playing for four hours, and I’m interrupting their after-lunch nap time. Cool.

Harper was super excited to be there – excited enough to poop in the lobby on their carpet. One of the employees immediately took her to the back, cleaned up the poop, and pleasantly excused her sudden bowel movement as “nerves.” Cute.

There were a lot of people working there – the [many] dogs get a lot of attention. They get to play on a doggie playground, in a doggie pool, and with doggie friends. This place might be cooler than any hangout I’ve ever been to. I was suddenly jealous of my dog’s good fortune. Clever.

When I picked Harper up at the end of the day, she was excited to see me, but it was more of a “Hey, let me show you my new digs” rather than “My friend! Take me home! Take me home!” Harper’s report card boasts that she enjoyed herself, so raise your glass to that.

hey, that was pretty fun. i want to go to there again.

Fine, then! Doggie Day Camp is cool if you find a good one. It did well for us in a pinch, and I’ll probably have to spend that $16 to send Harper back  from time to time just to show her how much I love her. Darn it.

You are currently viewing the archives for April, 2012 at Clever Days.