I have long since been a user of BriteRevolution and NoiseTrade. On both of those websites I found Andrew Belle‘s music. Here is the first song of his I downloaded…

…and fell in love with. (The fact that he did the song with Katie Herzig wasn’t hurting his case at all.) I watched him open for Greg Laswell in Evanston, IL earlier this year, and I really enjoyed seeing him live.

His video for The Ladder has been released, and I totally fell in love with the animation.

Go find yourself some Andrew Belle. If not for his music, then for his food blog. You won’t regret it.

I don’t keep a journal. I should; I know I’d remember things a lot better if I did.

Mom wouldn’t let us keep the whole newspaper, so I took a picture of it and put it in my scrapbook. I was really into scrapbooking in 2001.

Ten years ago on a Tuesday morning in September, our chapel service at school became less of a sermon and more of an expansion on what had just happened in New York City that morning. In the wake of that ugly event, our English teacher had us write down our thoughts on the attack on the World Trade Center:

Great Day in the Morning

It was a day just like any other day. At 9:50 am, we were let out of our second period class to go to chapel. A friend stopped me and asked with wide eyes, “Sarah, did you hear what happened? The World Trade Center and the Pentagon were hit by airplanes! We heard about it last period…” Her voice droned off. At first, I thought she was joking; I could not believe it. Is the President all right? Is new York in flames? How many people are dead? How did two planes happen to crash into two of the most important buildings in the United States in the same day – the same hour?

For the rest of the school day, we watched the news on the classroom televisions. The devastation came to life as we watched replays of the airplane sinking into the side of the North Tower and looked at the rubble standing six stories high. It was all so heartbreaking. I could not help but shed a few tears for the children who lost their parents, for the parents who lost their children, for the citizen who lost his best friend. This tragedy certainly brought America to her knees asking for God’s help. Isn’t it interesting to see how quickly she has gotten off her knees? What will it take for our nation to truly turn back to God?

Not only do I see that my writing skills have grown (thank goodness), but I see that the tragedy of 9/11 deeply affected a high school senior from Cleveland. Thanks, Mrs. Jaggard for making me put my thoughts on paper that day. To write things down is to remember things a little better. September 11, 2001 was an event that needed to be remembered for what it was – not romanticized, and certainly not forgotten.

p.s. On days like September 11 I am proud to come from a family of firefighters and police officers. First responders are my heroes: Thanks for doing what you do.

It’s always nice to feel like you have rescued something. A chair from the garbage could become your next swing, burned vegetables have been known to make pretty good soup, and an ugly dress from a thrift store is often transformed into something unique and adorable.

We felt pretty good about ourselves when we rescued a puppy. Josh and I had been wanting to get a dog together since we were first married. However, we knew a dog would require attention, time, and money – things we couldn’t afford to give a dog when we were newlyweds.

When we decided we were ready to bring a dog into our lives, we made a trip to the Humane Society in town. Twice we went, twice we fell in love with a dog, and twice we were rejected. Never mind why rejection came – we’ll just say the reasons were silly enough we decided that now is not the time to get a dog.

On the way to my cousin’s wedding in Dayton at the end of August we stopped at the Guitar Center in Indianapolis. After Guitar Center, we went to Five Guys for lunch. (My first trip there; that’s a good burger.) next to Five Guys is a PetsMart. We love going into pet stores and cooing over other people’s dogs, so we decided to do so before we continued our journey to Dayton.

PetsMart was hosting an adoption day featuring three rescue shelters. The first one we saw had teeny breeds of puppies. Too small for us – moving on…

The next shelter had somewhat larger pups. The beagle/hound mix caught our attention with her perkiness and big ears. The fluffy brother-sister duo were cute Shepherd/Lab mixes. The fourth pup in the pen was a silky Shepherd mutt desperately trying to nap while the others were playing with potential adopters. I didn’t mind interrupting her nap to pick her up and pet her. So languid. So silky. So sweet.

Josh suggested we take her home. “We really should; these puppies cost less to adopt than adult dogs at our Human Society. Don’t you like that one?” I now had two sets of puppy eyes staring at me.

He insisted further that we get one. I suggested we walk away, pray about it, and come back in a bit to see if she was still there. We needed to get cash anyway.

The PNC was remarkably easy to find.

I prayed for wisdom – whether we should get a dog (or two! Josh added), patience, and commitment.

We came back to PetsMart and held the silky Shepherd pup again while we asked the shelter worker about her. How old? 9 weeks. What breed? Shepherd mix with maybe some Husky, considering her coloring. Does she get along with other animals? She’s been in foster care with two big dogs, and they get along well. 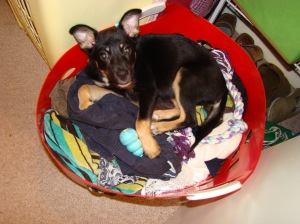 "i get along well with everything. even your laundry."

We’ll take her. The shelter workers were happy enough to let us have her. We exchanged information and money for the puppy, some food, and a voucher for spaying her at 6 months. We gathered a collar, leash, Kong, and two Nylabones from the store. We reached for the training pads, but the PetsMart trainer advised against it. “You won’t need those. Just take her out regularly and reward her for going outside.” Best advice ever. “Oh, and make sure you always get her high-quality dog food. The cheap stuff is all filler.” Check. 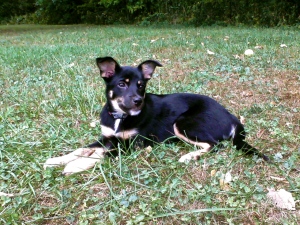 After three days of having her we settled on the name Harper. Funny how dogs settle into a name.

she wants a treat. so. badly.

What’s your best guess? What kind of dog do you think Harper is?

trying desperately to teach Harper what "come" means. still working on that one.

You are currently viewing the archives for September, 2011 at Clever Days.